This transcription was made as part of a recital on the theme of Spain. It is based on the orchestral score and calls for a preferably symphonic instrument with a minimum of three keyboards and, if possible, a combinator, due to the many changes in registration imposed by the “colours” that have to be found to give full meaning to the musical text. Precisely, the composition of the orchestra is important: it suggests changing hues related to situations and feelings: joy, pain, anger. This is why I point out, as I go along, the entries of the most significant instruments and/or ensembles.

La Vida breve was created in France in Nice, at the Casino municipal, on April 1st, 1913; then in Paris where Falla had lived since 1907 and where he received the advice of Paul Dukas and Claude Debussy. This early work by Falla is one of the few Spanish operas that has made a name for itself in the international repertoire of the 20th century.

The press was not mistaken: “Subtle qualities of this work, worthy of Bizet's Carmen.” “The listener is transported to Andalusia, thanks to the most varied means of expression, the most nervous, the most supple too, thanks to a sensitivity, a shimmering and fluid subtlety, natural gifts of this remarkable composer.” “A musical work of the greatest interest.” “Splendid masterstroke.” “All of Andalusia, all its melancholy, all its picturesque ruggedness...” 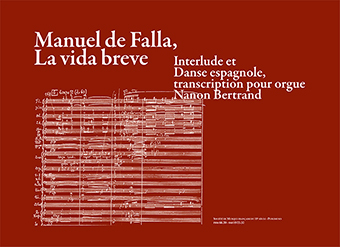